Peter Boykin was inspired to teach by his great-great grandfather - a slave, a cadet, and a teacher 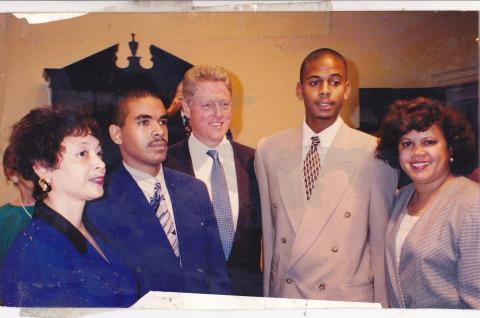 Peter Boykin, a history teacher in Detroit, Michigan, recounts the amazing story of his great-great grandfather named Johnson Chestnut Whittaker who was born into slavery in 1858 and was the subject of a book and TV movie titled, Assault at West Point. Whittaker would later become a teacher and a principal, which inspired Boykin to become an educator himself over a century later.

Takia Maxxwell, one of Boykin's former students, also pays tribute to her former teacher, describing the impact he's had on her life. This story begins over 150 years ago (and perhaps well before that) and reminds us that Johnson Whittaker's impact (like so many teachers) lives on for generations.

The picture shown on Teacher Stories was taken of Peter and his family at the White House in 1995, where President Clinton posthumously commissioned Johnson Whittaker.