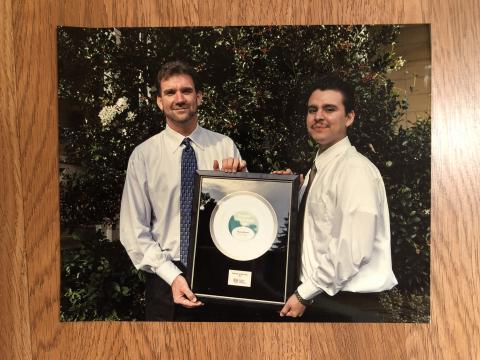 Until one of his former students, Daniel Osorio, nominated him as Teacher of the Year, Marty Brandt considered himself "just another guy" -- a high school English teacher who would never become the educator he hoped he would become when he entered the profession.

Daniel recounts the time when Mr. Brandt had asked his students to write their own ending -- any ending they wanted -- to The Great Gatsby.  "I had never been engaged like that before," Daniel says. "It was really the catalyst to feeling like...man...I could really do this if I wanted to."

Daniel says he uses much of what he learned from Mr. Brandt in his own work now as a professional filmmaker and even as a mentor to a group of East San Jose rap artists. "I have become their Marty Brand," helping them to grow as artists and as people.

After Daniels's nomination and the subsequent award Mr. Brandt received as one of California's best teachers, he realized that he was more than "just a guy." That realization gave him the freedom to become intensely curious about what it means to be a successful English teacher how he could learn to become an even better one himself.

Mr. Brandt reflects on how he teaches students to write now and how his approach has evolved over nearly three decades as an English teacher. "My approach to writing instruction has become one of encouraging development as opposed to what I used to do which as noting errors," Brandt says.